To operate modern healthcare, biomedical, microbiological, chemical, medical research, compounding pharmacy, or pharmaceutical lab, a lab or operations manager should understand the capital equipment employed regularly. The more thorough the knowledge of each device, the more efficiently the lab manager can plan for the implications of deployment, maintenance, repair, and replacement. Most equipment in a laboratory performs an active function. For example, a centrifuge separates liquids, and CO2 incubators grow tissue cultures. In comparison, the role of a biosafety cabinet, while critical, might seem passive. A biosafety cabinet (BSC) does not perform anyone's direct function, but rather it prevents adverse conditions from occurring. BSCs cabinets are meant to prevent harm to employee health and contamination of the environment. Some also prevent contamination of the product in the work zone.

Biosafety Cabinets go by many names; Biological Safety Cabinet, tissue culture hood, and more. Unlike fume hoods, Biosafety cabinets function by causing air to move in precise patterns, as well as filtering air to eliminate particulate matter. This ability requires sophisticated engineering in such areas as the fluid dynamics of airflow, ergonomics of usability, design of the enclosure, and electrical design of motors, blowers, and control systems.

The development of BSCs was a lengthy process, as the 1991 Clinical Microbiology Reviews paper, Biological Safety Cabinetry makes clear.1 The first report of an infection that was the result of exposure to materials in a lab came in 1893. The first survey of a laboratory-acquired disease, typhoid fever, primarily the result of pipette use, began in 1915.

By the middle of the 1900s, the link between laboratory practices and potential contamination and infection was more fully understood. A 1950 survey reported at the annual meeting of the American Public Health Association noted that 5,000 laboratories recorded 1,342 instances of laboratory-acquired infections. Thirty-nine deaths resulted. Of the 1,342 infections, only 467 had previously been made public. This pattern of infection continued in the following decades, as reported by the Centers for Disease Control and Prevention (CDC) and the National Animal Disease Center. Such reports may not have addressed the full scope of harm. Focusing only on human infection may overlook the adverse effects of poor contamination control on the work product of the labs involved. The forerunner of the biosafety cabinet appeared in 1909 when a company offered a ventilated hood to prevent infection with tuberculosis when preparing tuberculin. An enclosed cabinet was first mentioned in the scientific literature in 1943. By the early 1950s, the U.S. Army Biological Laboratories at Fort Detrick, Maryland developed and implemented sophisticated containment cabinet technology.2

The use of containment cabinets began to spread, continuing to the present. Currently, BSCs are considered standard in laboratories to prevent a broad range of potential contaminants.

Although BSCs must provide safety for personnel and improved accuracy in testing and production through controlling airborne contamination, the terms “safety” and “control of airborne contamination” are relative terms. Is there an acceptable degree of exposure in a particular instance? Does a standard exist by which the effectiveness of BSCs from different manufactures can be measured?

For those reasons and others, NSF International, a standards development organization, created standard NSF/ANSI 49 that classifies BSCs into classes and types based upon the performance and protection each must meet. Another core standard similar to NSF/ANSI 49 is the European standard EN12469 for Microbiological Safety Cabinets (MBSC), another term for BSC, that determines similar criteria a BSC must meet. What satisfies the needs of one lab might be overkill or insufficient for another. Minimum standards allow lab managers and safety officers to know, at the very least, what they can count on. To understand BSCs in light of a lab’s safety requirements, an extended look at BSCs is necessary. A cabinet that can be recirculated back into the laboratory or be exhausted through a facility’s HVAC system. It uses negative pressure from an interior blower motor or the external exhaust system, creating an air barrier at the front of the cabinet at a minimum speed of 75 linear feet per minute with the air then circulating through the cabinet. Negative pressure prevents air from spilling back into the lab environment. The cabinet draws in air from a supply opening typically at the front of the cabinet. Exhausting air from the cabinet is passed through a HEPA filter. Class I cabinets are designed for low-to-moderate-risk biological substances. They protect personnel and the lab environment but not the work product in the cabinet.

How Does a Class I Biosafety Cabinet Work? A cabinet with a partially open front for worker access. Class II is similar to Class I in that it uses negative pressure to keep air from moving through a supply opening and the access panel. The primary difference between Class I and Class II cabinets is that a Class II cabinet creates an air barrier at the front of the cabinet by creating a vacuum using an airfoil that directs air under the work surface instead of over the work area. It also filters the air supply to the internal work area and uses laminar airflow to eliminate turbulence and the possibility of cross-contamination within the cabinet. The air splits on the work surface and is pulled into grills located on the front and back of the cabinet. A portion of air will be drawn from the side of the work area and under the work surface where it is directed up a channel located on the back of the cabinet then either re-circulated back into the work zone, exhausted, or a combination of the two depending on a cabinet’s subtype. There are four subtypes of Class II cabinets. Air is drawn through the cabinet’s front opening at a minimum speed of either 75 linear feet per minute or 100 linear feet per minute, depending on the subtype. Some portion or all of the air is either reintroduced into the cabinet’s work area through a supply HEPA filter or discharged back into the laboratory or building’s exhaust system through an exhaust HEPA filter. Class II BSCs are designed for low-to- moderate-risk biological substances. An enclosed cabinet that protects personnel and the environment. Typically designed for biosafety level 4 pathogens. Users place their hands into mounted gloves that pass through a non-open window and manipulate all work in that fashion. Blowers create a negative pressure of at least 0.5 inches of water gauge. Air enters the cabinet through a HEPA filter. Exhaust air passes through two separate HEPA filters, or a HEPA filter and an air incinerator, and finally through ducting to discharge into an exhaust system separate from the general laboratory exhaust system. Class III BSCs typically do not offer laminar airflow within the internal work area. Materials pass into the workspace through a dunk tank on the floor of the cabinet or through a double-door pass-through box that can be decontaminated between uses. The cabinets are designed for high-risk biological substances. The Class II BSC has the broadest use and is the most commonly found in labs. Seth David De Penning has 8 years of experience working in the laboratory equipment industry and has spoken on the topic of biosafety cabinets to academic, government, and research institutes in multiple countries around the world. 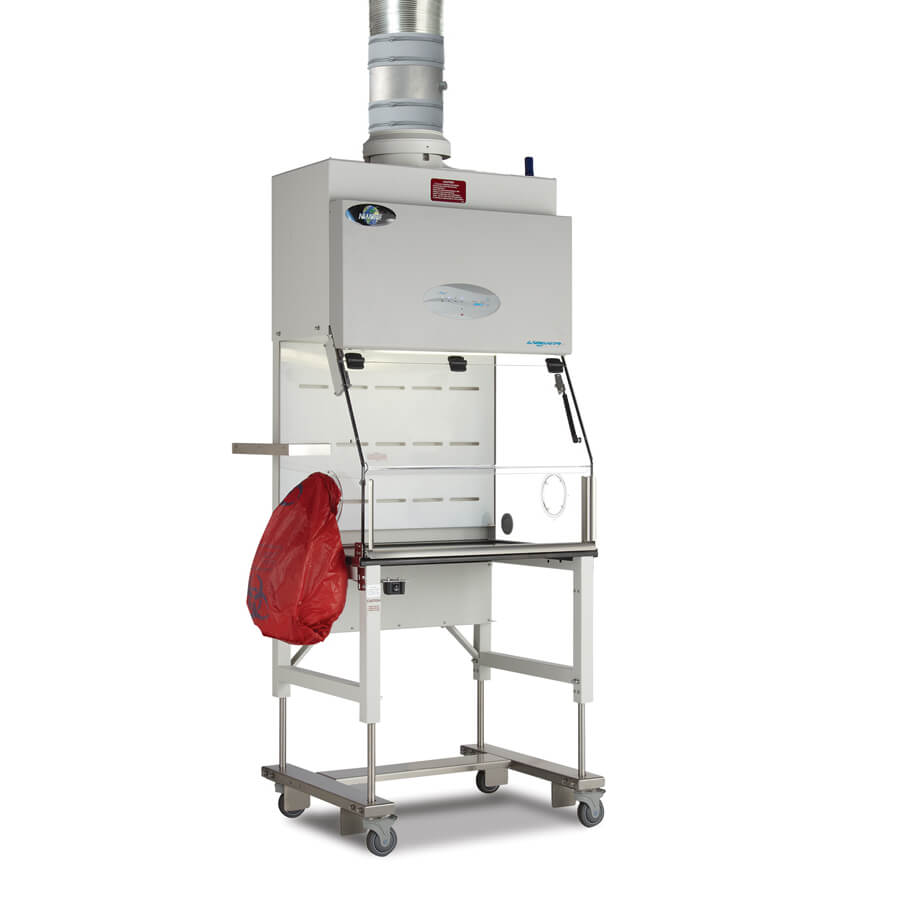 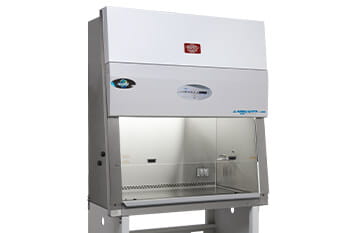 The NU-543 is configurable for a broad range of applications and geographies with a choice of NSF listed access openings, an optional smooth interior, EN 12469 listed configurations, and a global supply chain.
Learn More
Class II Type B2 Biosafety Cabinets 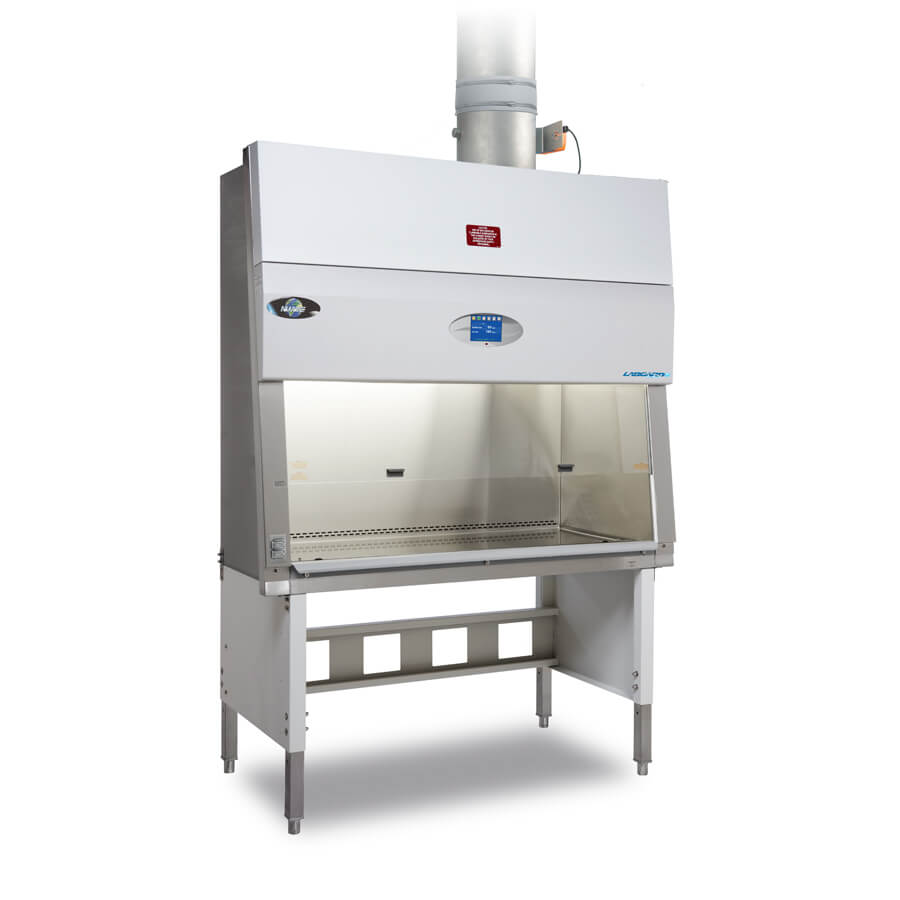 The NU-560 combines durable construction and an efficient motor with a control system providing the safety and monitoring appropriate for the demanding work done in a Class II Type B2 biological safety cabinet.
Learn More Watch and listen to our national sales manager Drew Pippin teach the basics about biosafety cabinets (BSC) and the beginning steps of selecting the proper BSC for your application.
Learn More 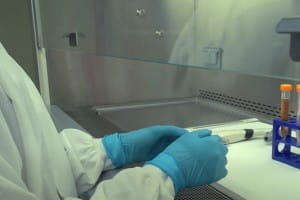 Minimize workplace injuries working in the comfort of a LabGard Biosafety Cabinet.
Learn More
View All Resources
Cookies help us improve your website experience.
By using our website, you agree to our use of cookies.
Confirm